Deal: In a Deadly Game of Working Undercover, Dea Special Agent Michael S. Vigil Recounts Standing Face to Face with Treacherous Drug Lords Who Began Their … You Are a Federal Agent We Will Kill You.” 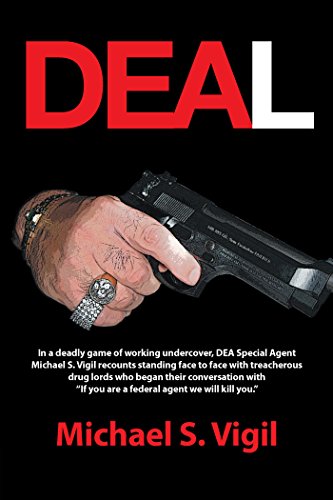 There were always two hotel rooms. One for his counterparts doing the surveillance and one he used as the stage to play a ruthless Mexican drug trafficker making the deal for enormous amounts of cocaine, marijuana or heroin. One small slip of the tongue, or a slight bead of sweat on the brow could result in his violent, painful death. He was willing to do anything to convince the dangerous criminals he was one of them. Whether showing them a million dollars cash packed in a suitcase, flashing a bag of diamonds, buying rounds of drinks for everyone in a nightclub, whatever it took to make them believe he was as greed-filled and callous as they were.

It was a spectacular cat and mouse game with the ultimate reward of sitting next to a hand cuffed cartel head on a flight headed to prison. It was listening to him beg for his freedom, offer millions in bribes, threaten his life and both knowing he had won.