The Amazon: What Everyone Needs to Know® 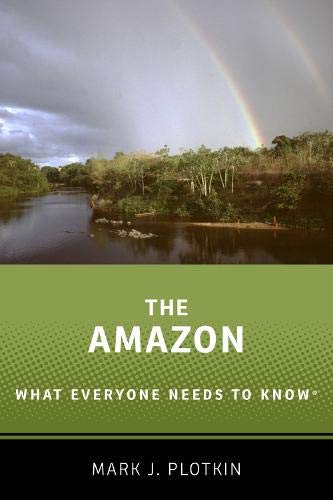 The Amazon is a land of superlatives. The complex ecosystem covers an area about the size of the continental U.S. The Amazon River discharges 57 million gallons of water per second–in two hours, this would be enough to supply all of New York City’s 7.5 million residents with water for a year.
Its flora and fauna are abundant. Approximately one of every four flowering plant species on earth resides in the Amazon. A single Amazonian river may contain more fish species than all the rivers in Europe combined. It is home to the world’s largest anteater, armadillo, freshwater turtle, and
spider, as well as the largest rodent (which weighs over 200 lbs.), catfish (250 lbs.), and alligator (more than half a ton). The rainforest, which contains approximately 390 billion trees, plays a vital role in stabilizing the global climate by absorbing massive amounts of carbon dioxide–or
releasing it into the atmosphere if the trees are destroyed. Severe droughts in both Brazil and Southeast Asia have been linked to Amazonian deforestation, as have changing rainfall patterns in the U.S., Europe, and China. The Amazon also serves as home to millions of people.

Approximately seventy tribes of isolated and uncontacted people are concentrated in the western Amazon, completely dependent on the land and river. These isolated groups have been described as the most marginalized peoples in the western hemisphere, with no voice in the decisions made about their
futures and the fate of their forests. In this addition to the What Everyone Needs to Know® series, ecologist and conservation expert, Mark J. Plotkin, who has spent 40 years studying Amazonia, its peoples, flora, and fauna. The Amazon offers an engaging overview of this irreplaceable ecosystem and
the challenges it faces.